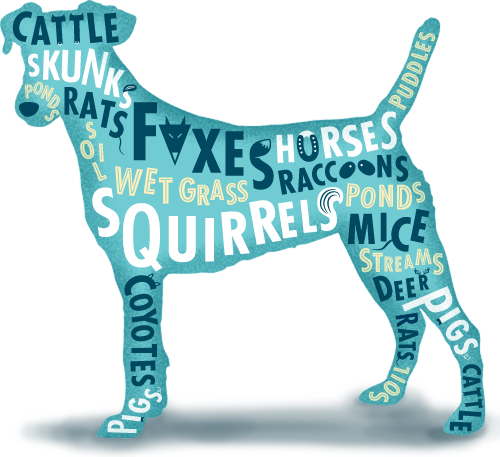 You may be seeing leptospirosis in the news lately. Magley Animal Hospital recommends the “Lepto” vaccine annually for dogs that have outdoor lifestyles and come in contact with wildlife and/or standing water. Leptospirosis is a serious disease that can be transmitted to people as well.

What is Leptospirosis and how is it spread?

Leptospirosis is a spiral shaped bacteria that live in that live in water or warm, wet soil. It is predominantly transmitted to dogs or humans through contact with infected urine; though there are other less frequent methods. Additionally, indirect transmission occurs through exposure of animals to water sources, soil, food or bedding that is contaminated. These leptospires can penetrate mucous membranes (like the gums) and wet or broken skin. In other words, it does not take your dog drinking from a puddle, to get leptospirosis. It can be as simple as your dog walking through moist, infected soil then licking their paws.

Leptospirosis is an infectious zoonotic disease that causes serious illness in dogs, other animals, and people throughout the US. This disease is caused by bacteria called leptospires that live in water or warm, wet soil. Leptospirosis causes a variety of flu-like symptoms, but more than 80% of dogs diagnosed develop serious, short-term kidney problems. Yet dogs that do recover may still be at risk for chronic kidney failure or become carriers of the disease, spreading the bacteria during urination.

Previously thought of a warm-weather disease that occurs in the rural south, leptospirosis has now been reported all over the US as well as suburban and city settings. Leptospirosis can be spread to humans as well. Even if your dog spends most of their time inside, they still have access outside water sources that could be potentially contaminated.

Clinical signs of Leptospirosis infection include fever, loss of appetite, vomiting, dehydration, and jaundice. By the time your dog starts showing these signs, it is very difficult and expensive to treat.

Once inside the body, the leptospires travel to several different organs including the liver, kidneys, spleen, eyes, reproductive tract and central nervous system. The most affected organs are the kidneys causing failure which can be fatal. Common clinical signs in dogs include fever, lethargy, loss of appetite, increased thirst and vomiting. Less common signs include diarrhea and bleeding (due to loss of platelets to help with clotting). None of these signs point directly to a diagnosis of leptospirosis, so testing is needed including baseline lab work (serum chemistry, CBC, urinalysis). If the kidney values are elevated with supporting evidence of failure in the urine coupled with elevated liver values, further testing for leptospirosis is needed. Several different special labs have a direct blood test for the most common serovars of leptospirosis.

Vaccination is the best option for protecting you and your dog from the dangers of Leptospirosis.